Andalusia as fascinating as ever

Andalusia – as fascinating as ever – a round trip

It is a funny feeling when driving along the southern coast of Andalusia near Salobreña. In front of us the bright sunlight is reflected in myriads of small diamonds from the Mediterranean Sea. In the background the majestic snow covered mountain tops of the Sierra Nevada look down on us and in between we discover groves of avocado and mango trees, fruits you do not expect to find in such abundance in Europe.

It is this kind of emotion that awaits you wherever you go in Andalusia. Be it while tasting “pescaitos fritos” in El Puerto de Santa Maria, just across the bay from Cádiz, or when hiking through century old cork tree forests in the hills of the Sierra de Aracena, or during an evening of “tapeo”, tapas bar hopping, in Seville’s Salvador district culminating in the extraordinary taste of a hand sliced piece „jamón ibérico de bellota“.

We have put together a 14 day tour through Andalusia that will allow you to get to know the local traditions, excellent cuisine, beautiful nature and the passionate way of living of its people. 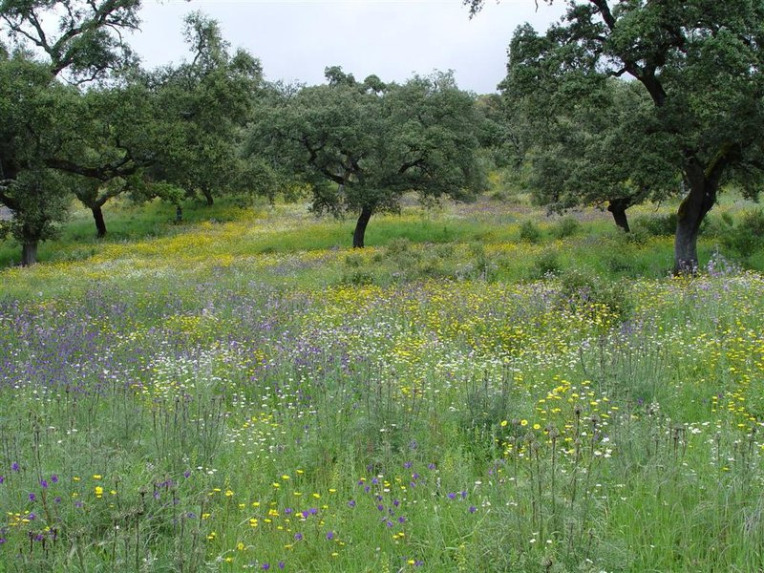 Day 1: Arrival Málaga – Drive to Salobreña and the Costa Tropical

Subtropical coast of Andalusia on the southern slopes of the Sierra Nevada.

Casa de los Bates: A manor house with ocean view about one hour east of Málaga 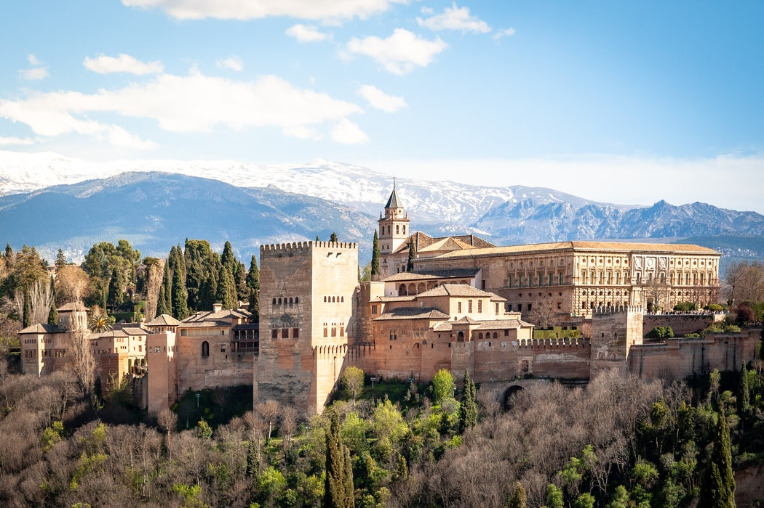 Day 2 and 3: Granada and the Alpujarras

Just the excellent tapas bars, such as the Casa Diamante and the Casa Oliver would be reason enough to visit the city of the Alhambra, but there are many more reasons one of them certainly being the little alleyways of the Albaicín with its still authentic “tablaos”, the Flamenco shows. On the way up from the coast do not forget to make a detour to visit the Alpujarras, the valley on the southern slopes of the highest Sierra Nevada peaks where the Moors held out until the 16th century.
In the city:

El Ladrón de Água: Boutique hotel in the Albaicín quarters with view to the Alhambra
At the foot of the Sierra Nevada:

Almunia del Valle: This small, charming hotel lies just 15 minutes outside of Granada in a beautiful valley with stunning views.

Day 4: Baeza and Úbeda and the Sierra de Mágina in Jaén

The drive from Granada do Baeza in the yet undiscovered region of Jaén gives you a feel of the real Spain. Perfectly lined olive tree groves spread across the smooth hills as far as the eye can see only once in a while interrupted by jagged mountains towering over the valleys. The smell, heat and landscape make a powerful mix. Halfway there lies the nature park Sierra de Mágina. 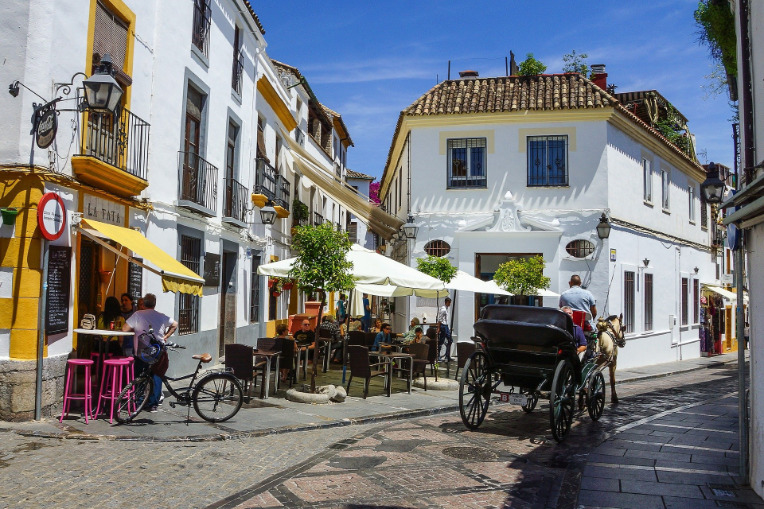 The “Mezquita” of Córdoba is definitely a must, but can also be visited on your way to Seville.

Hotel Viento 10: Sweet and cosy guesthouse in one of the side streets of a typical “barrio“ of Córdoba.

Seville, the heart and soul of Andalusia. You must book early, but a stay during the festivities of the “Semana Santa” in the Easter week or the “Feria de Sevilla” is an unforgettable experience. Don´t forget to go on a “tapeo” in the barrio Salvador.

Hotel Amadeus: Small and authentic hotel in the Barrio Santa Cruz where you can enjoy breakfast on a great little terrace on the roof. 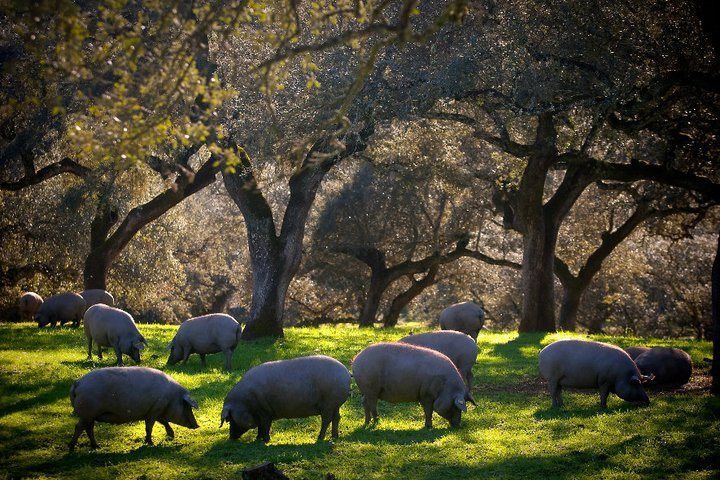 We think that the Sierra de Aracena y Aroche, about 85 km north west of Seville is one of the most beautiful and yet undiscovered regions of southern Spain. Dense oak and chestnut forests, whitewashed villages and excellent cuisine are just some of the landmarks of this magnificent part of Andalusia. It is also the origin of the world famous “jamón de Jabugo”. Try it with a “tostada y tomate” at the El Manzano on the Plaza Mayor of Aracena, the region’s biggest and most spectacular town.

Hotel Convento de Aracena: A bit more chic hotel in a former monastery in the centre of Aracena

Molino Rio Alajar: On the outskirts of the fabulous village of Alajar a group of cosy little stone houses nestled next to a creek and surrounded by cork tree forests await you. 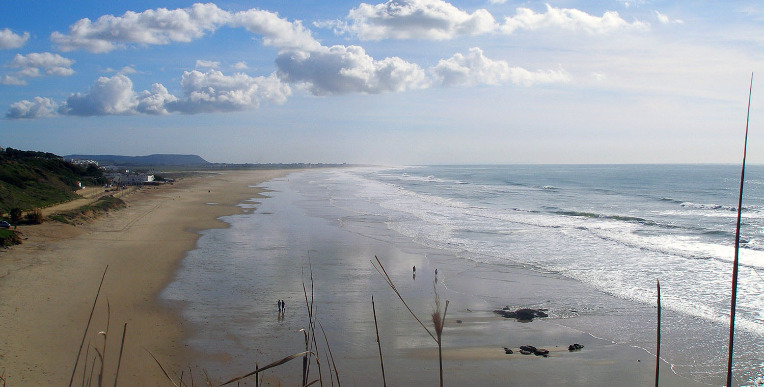 For those who wish to spend some time by the sea and prefer to avoid mass tourism, the area around Caños de Meca and Zahora is probably the perfect spot.

Arohaz Hotel & Gastrobar: Simple but friendly hotel in the centre of the enchanting town of Zahora, right next to the lighthouse of Trafalgar and surrounded by a number of different beaches, one nicer than the other. 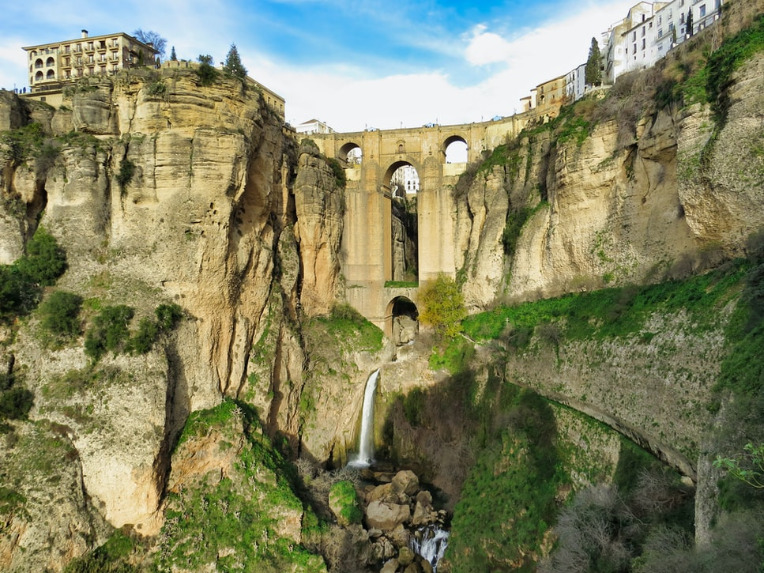 Driving back to Malaga make a stop in the laid back town of Tarifa and just before reaching Gibraltar leave the coastal highway in direction of Gaucín and Ronda (A-405). You will avoid the worst of the Costa del Sol’s urban sprawl and be rewarded with a beautiful drive past traditional villages and beautiful views of the coast.

Within a majestic mountain panorama lies the El Molino del Santo in the picturesque town of Banaoján. 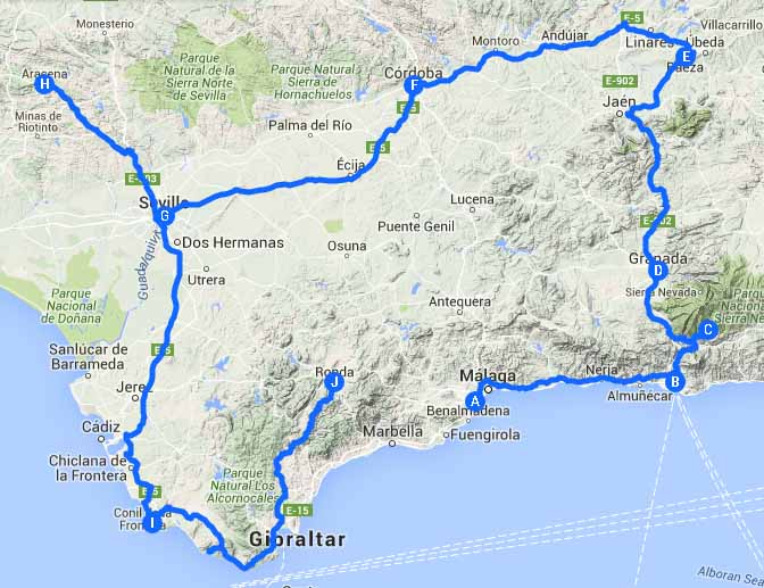