Vineyards in Bandol, trekking in Esterel, kite surfing in Presqu'île de Giens and trips to the islands Porquerolles and Port-Cros: This is Var.
Impossible to forget: the world-famous gulf Saint-Tropez.
Enjoy the impressive nature and watch the crème de la crème at the beach!

View ALL HOTELS and VILLAS in VAR

Choose from our unique collection of hotels in Var.

Are you looking for a boutique hotel in Saint Tropez or a comfortable bed & breakfast in Seillans?

Whatever your taste, we're sure we'll help you to find your perfect getaway!

Saint Tropez is probably the most famous place in Var: Jet Set, Champagne, beaches and yachts. It's where you meet the beautiful and the rich. But besides this famous fishermen village, there are many beautiful beaches, unbelievable islands and dreamy towns in Var.

Ramatuelle is only a few kilometers away from St. Tropez. Perched on a hill top, this medieval village is a picturesque labyrinth of narrow streets and alleys overgrown with lush vegetation and fragrant flowers. The narrow alleys are boasting with small boutiques and work shops by artisans, painters, and jewelry makers.

Toulon is a place that is despite its location between St. Tropez, Marseille and Nice, just at the seaside, not yet known by tourists. Here, you'll find the true Provence. On the markets, it smells like thyme, lavender and sea. Just next to Toulon, there are beautiful beaches and the Iles d'Hyeres which boasts with a natural underwater park around the island Port-Cros. Just dive into it!

And if you like to hike, you'll love the Masif de L'Esterel. The soil and rocks of the range are of volcanic origin, composed mainly of porphyry, which gives the hills a red colour. It's a truly amazing nature spectacle. When you're already in the region, you should also visit the cathedral Fréjus. The baptistery of the cathedral is a fine example of Merovingian architecture. It was built in the 5th century but hidden during later reconstruction, and was rediscovered in 1925 by French architect Jules Formigé. It is considered the oldest Christian structure in Provence, and one of the oldest in France.

The South of France offers a fantastic cuisine. When travelling there, you should definitely try some fresh fish, lobster and crayfish in one of the many charming restaurants in the region. Toulon is famous for its 'Chapon' (Bigscale scorpion fish), in Bandol however, you'll find great wine. Stroll through the vineyards and visit a cellar to try the wine! 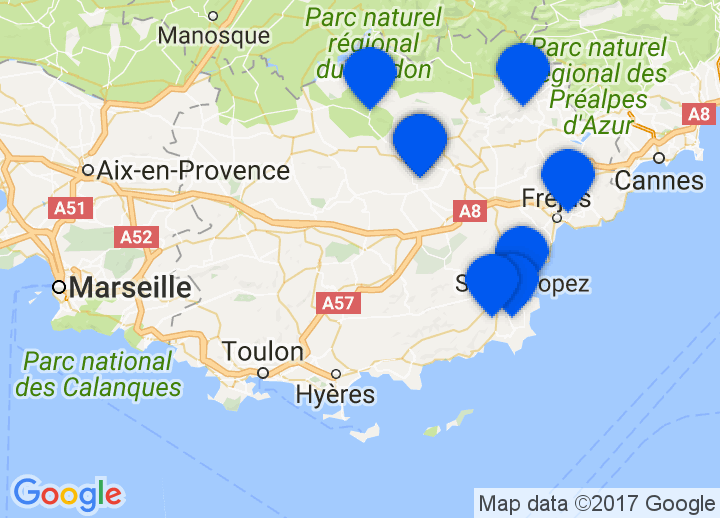 Just married or simply fallen in love? Take a look at our most romantic, stylish and idyllic hotels and guesthouses. Luxurious elegance or beautiful environment, the choice is wide …
Honeymoon & Romantic Hotels
A handpicked selection of elegant and luxurious accommodations. From five-star hotels to beautifully decorated guesthouses in unique surroundings ….
Luxury Villas and Hotels
Child friendly hotels and self-catering holiday homes great for children and parents alike. Let your kids enjoy nature and local traditions in the company of others with lots of unique things to do …
Child friendly lodgings
Take part of the laid back village life, stroll along cobblestone streets, dine in small traditional restaurants and smile at the locals on the main square.
Lodgings in Villages
There are so many beautiful wine regions that it is hard to make a choice. Besides the Chianti in Italy, Burgundy in France, the Douro in Portugal or La Rioja in Spain there are endless more …
Eno Tourism Hotels
Don’t want to leave your favourite pet at home? Just stay in one of our hotels and guesthouses where animals are welcome.
Pet friendly lodgings
Looking for a luxurious hotel next to a beach with golden sand, a villa above the dark blue of the Mediterranean or a small bed & breakfast in the hills overlooking the ocean …
Coastal Hotels and Villas
Handpicked selection of unique holiday homes and villas for a truly special escape, without losing that homely feeling.
Villas and Vacation Rentals

Hotels by city in Var