Located on Morocco’s Atlantic seaboard Oualidia (pronounced 'Wa-lid-ya') was, in days gone by, part of the Barbary Coast where it was frequently subject to incursions by Portuguese colonists and pirates.
Nowadays, its claim to fame is much more sedentary. Though the town itself may be best described as typically non-descript, basically it is made up of a street and some shops, it does have two major claims to fame. The fabulous beach and lagoon – so attractive are they that in the 1950’s Mohammed (grandfather of the current king) built a palace there (now overgrown with trees and flora) and the production of oysters.
They are sold everywhere through out town at great prices. Its combination of excellent beach, lack of major tourist infrastructures and Moroccan feel – it is a place where well heeled families flock to in the summer – make it an interesting location to spend some lazy Atlantic days without the hard sell of commercialism.

View ALL HOTELS and VILLAS in OUALIDIA - EL JADIDA

Choose from our romantic and charming Oualidia and Al Jadida hotels and riads, including luxury seaside resorts and bed & breakfasts. Whatever your taste, we’ll help you find that perfect getaway. 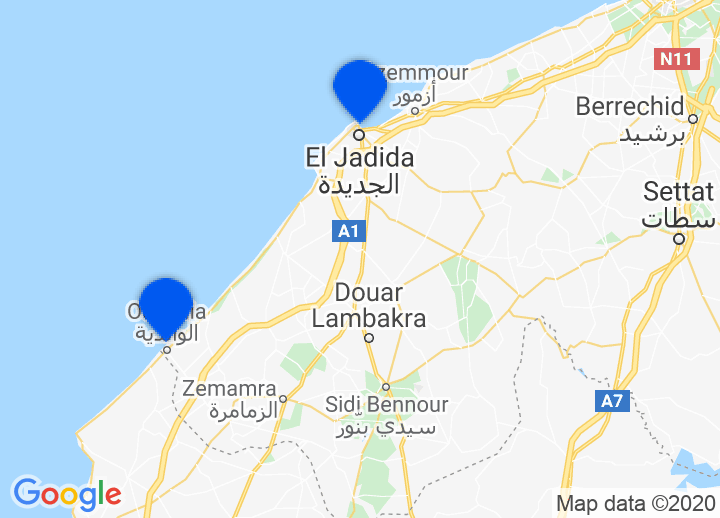 Just married or simply fallen in love? Take a look at our most romantic, stylish and idyllic hotels and guesthouses. Luxurious elegance or beautiful environment, the choice is wide …
Honeymoon & Romantic Hotels
A handpicked selection of elegant and luxurious accommodations. From five-star hotels to beautifully decorated guesthouses in unique surroundings ….
Luxury Villas and Hotels
Looking for a luxurious hotel next to a beach with golden sand, a villa above the dark blue of the Mediterranean or a small bed & breakfast in the hills overlooking the ocean …
Coastal Hotels and Villas
Looking for perfect breaks on secluded beaches? We have selected great places to stay near some of the best surf spots in Europe.
Surf and Watersports