Rio Grande do Norte is located in the northeastern part of the country and is considered by NASA, no less, as having the second purest quality of air, after Antartica.
Its 410 kilometers of sand, endless sun, coconut palms and lagoons are responsible for the fame of beaches, such as the secluded white sandy shores of Praia de Cajueiro, Genibapu (to the north of the capital, Natal), with sand dunes reaching 50 meters of height.
The Praia de Baía Formosa beach, the prettiest of the south coast, has “falésias”, stretches with reefs and very popular for surfing.
To the south, the beach of Praia do Sagi, a little more rustic, has clear waters and small dunes.
In Natal, beside the beaches, there are other tourist attractions, such as Fortaleza dos Reis Magos and the Parque das Dunas, the second largest urban park in the country

View ALL HOTELS and VILLAS in RIO GRANDE DO NORTE

The choice of beautiful seaside and beachfront hotels and resorts in Rio Grande do Norte is endless. We recommend staying in one of the quaint and more authentic pousadas, which are smaller and more typical than the larger resorts and hotels. If you need help in choosing the best place to stay, just contact us.

Here you will find warm water white sand beaches, sand dunes, sweet water lagoons, preserved atlantic forest, dune buggy rides, historic momuments, archeological sites with ancient inscriptions, thermal waters, all kind of accommodations, aquatic amusement parks, charm inns, resorts, handicraft, the best of the regional Brazilian northeastern cuisine and marvelous sea food... All this under a Sun that shines no less than 300 days an year.
Rio Grande do Norte state and its capital, Natal, offer a wide variety of attractions for the whole family and all kinds of budget.
A little further from the coast, the city of Mossoró is considered the capital of irrigated fruit-growing, supplying more than 70% of the domestic market for melon. Besides that fruit, the State is famous for its mango and cashew plantations. The latter led the State to be entered in the Guinness Book.

Located on the Pirangi do Norte beach, the largest cashew tree in the world with 500 meters in circumference and 92 years of age, covers a 7.300 m2 area. Its crown is equivalent to a grove of 70 cashew trees. Pirangi do Norte is also the center for the handcraft production of bilro and labyrinth lace.
The lace makers patiently and quickly weave the fine cotton yarns until tablecloths, bedspreads and clothes of all kinds emerge.
Besides all that, the Barreira do Inferno is also located here, which was the first rocket launching base in Latin America. Warm waters, the shade of palm trees and a gigantic cashew tree are waiting for you in Rio Grande do Norte.
Come on, you’ll become a fan. 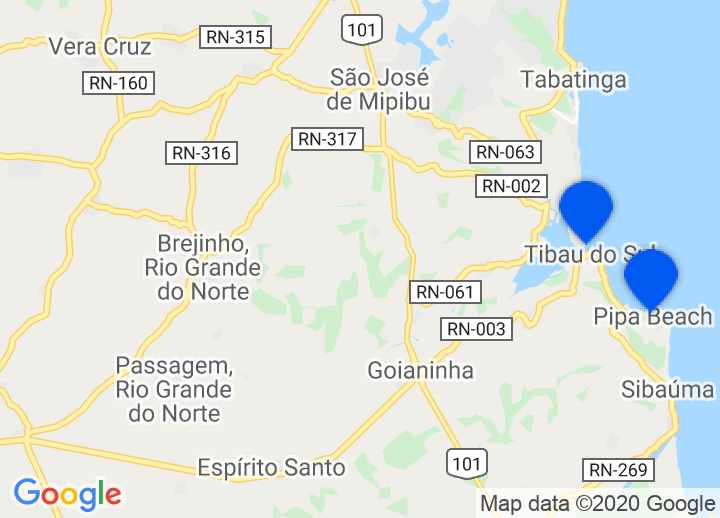 Just married or simply fallen in love? Take a look at our most romantic, stylish and idyllic hotels and guesthouses. Luxurious elegance or beautiful environment, the choice is wide …
Honeymoon & Romantic Hotels
Looking for a luxurious hotel next to a beach with golden sand, a villa above the dark blue of the Mediterranean or a small bed & breakfast in the hills overlooking the ocean …
Coastal Hotels and Villas
Looking for perfect breaks on secluded beaches? We have selected great places to stay near some of the best surf spots in Europe.
Surf and Watersports

Hotels by city in Rio Grande do Norte