It is said the only thing missing in Seville is the ocean. This beautiful city boasts a wealth of monuments, including the Mezquita, the most beautiful mosque built by the moors and the great Alcazar cathedral.
The historic centre of Seville is located on the left bank of the river in a spot previously protected by the Almohade wall, of which some ruins remain today. It contains some of the most famous neighbourhoods of the city such as Santa Cruz, San Bartolomé, San Vicente, San Lorenzo and El Arenal. On the right bank of the river stands the Arrabal suburb. These are the most interesting areas for the traveller to visit. The rest of the city is built around a series of expansion projects, the most important being that carried our for the Latin American Exhibition of 1929, built along the southern stretch of the Guadalquivir River. In 1992, near the Cartuja Monastery, a new area was developed to the west of the city where Expo 92 was held. 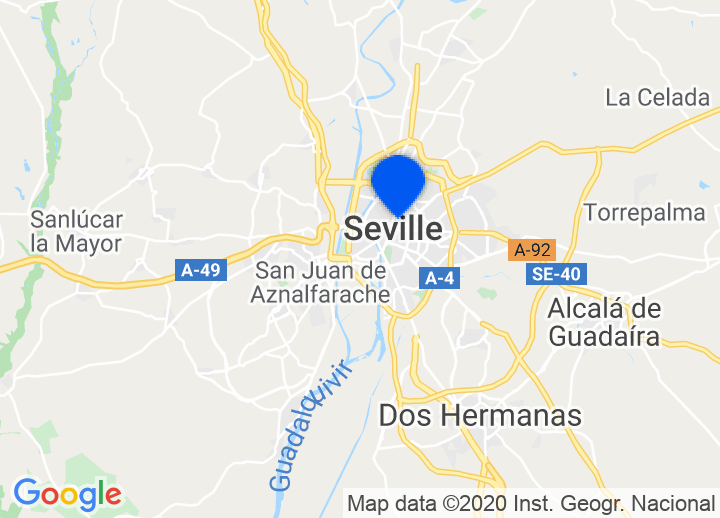 View ALL HOTELS and VILLAS in SEVILLE

If you are looking for the best Seville hotels, you can choose between traditional Seville hotels, with their typical Andalusian flair, trendy Boutique Hotels Seville as well as cozy bed and breakfast in Seville.

Fiestas Seville has some of the most important fiestas in Andalusia. When the orange trees begin to blossom, Seville decks itself out for its famous Semana Santa (Easter Week) and Feria de Abril (April Fair). Semana Santa started in the 14th century and is the city's most famous celebration. It spans the 7 days of Easter, with the staging of daily processions.
The other big celebration, the Feria de Abril, was created in the mid-19th century as an agricultural and cattle fair. During the celebration, the city's men flock to the event dressed in short jackets, boots and chaps, and the women wear colourful dresses with ruffles.
The Romería (pilgrimage) del Rocío is also worthy of note. The pilgrims come from all to the sanctuary of the Virgen del Rocío in the village of Almonte, Huelva, to see the procession. The procession is solemn, but the uniforms and dress of the different Brotherhoods are colourful. Many of the streets along the path are covered with white awnings.

Andalusian cuisine has been influenced both by the climate and by the many cultures that have established themselves here. The land is ideal for growing olives and grapes. In fact, one of the oldest and most famous wines in the world - sherry - is cultivated here. Another excellent drink has also been created in Andalusia: the sangria, a blend of red wine and fruit. Gazpacho soup is also an excellent light meal.

For vegetarians, the fresh, ripe vegetables of the region are a real feast for the palate.

Just married or simply fallen in love? Take a look at our most romantic, stylish and idyllic hotels and guesthouses. Luxurious elegance or beautiful environment, the choice is wide …
Honeymoon & Romantic Hotels
A handpicked selection of elegant and luxurious accommodations. From five-star hotels to beautifully decorated guesthouses in unique surroundings ….
Luxury Villas and Hotels
Close your eyes and imagine: just you, the mountains, valleys or the sea. Escape daily routine and enjoy the magic of nature in one of our secluded getaways set in amazing surroundings.
Lodgings in Nature
Who says good things must be expensive? We have discovered a number of quaint little hotels and bed & breakfasts that are great value for money without missing out on comfort, service and beauty.
Stylish Budget Lodgings
Child friendly hotels and self-catering holiday homes great for children and parents alike. Let your kids enjoy nature and local traditions in the company of others with lots of unique things to do …
Child friendly lodgings
Traditional dishes prepared with fresh local produce, lovingly prepared comfort food in a rustic setting or fine dining in an elegant environment, everyone has his preferences …
Hotels for Food Lovers
There are so many beautiful wine regions that it is hard to make a choice. Besides the Chianti in Italy, Burgundy in France, the Douro in Portugal or La Rioja in Spain there are endless more …
Eno Tourism Hotels
Don’t want to leave your favourite pet at home? Just stay in one of our hotels and guesthouses where animals are welcome.
Pet friendly lodgings
Feel like going out somewhere different and exciting, dining in that hip new restaurant or just to enjoy a different culture? Then it´s time for a city break. Here are some great places to start.
City Break Hotels
Handpicked selection of unique holiday homes and villas for a truly special escape, without losing that homely feeling.
Villas and Vacation Rentals

Hotels by city in Seville