Normandy combines a 360-mile dramatic coastline, with a verdant interior of lush farmland, bustling market towns, and historic landmarks such as the cities of Caen, Bayeux and Rouen. Gastronomic delights abound, from fine cheeses to cider and great seafood.

View ALL HOTELS and VILLAS in NORMANDY

Secretpaces has put together a small but exquisite selection of the best hotels in Normandy. With its fine restaurants and elegant charm, Normandy is ideal for a short break in a luxury hotel. But there are also many small and charming boutique hotel and bed & breakfasts or maisons d’hôte as they are known here that are perfect for a romantic getaway or just to relax and enjoy the countryside. If you travel with your family you can choose one of the self catering apartments and holiday homes. Near the sea or further inland, there is a something for every taste.

Normandy is a country full of contrasts, a mixture of seaside and countryside that will fire the imagination of the lovers of culture and greenery. It is a region full of natural resources – rivers, woods, and never too far from the seaside. The small fishing ports have become through the years famous seaside resorts where people from all over the world like to spend their holidays.
But while many will make the most of the beaches and lovely ports, the countryside still attracts lots of tourists with its nice prairies and green fields, remaining a nice and quiet place to relax and enjoy nature. With its undulating landscapes and green fields, Normandy will offer you fantastic and authentic sceneries. You will also discover manors, abbeys, chateaux and many other traditional places to keep lovely memories from! The Horse Country, that’s how we could also describe Normandy, with its prestigious stud farms and very famous races that are a very traditional event in this region, above all in Deauville, where the famous yearling’s sale takes place each year. This land is a real paradise for golfers – it has 23 eighteen-hole courses which are open all the year round. It is definitely one of the best regions for sea-trout and salmon – its lakes and rivers seem to have an endless amount of fish. Normandy is very famous for its green landscapes and countryside and you will enjoy its delights on foot, on horseback or by bicycle.

Parts of Normandy consist of rolling countryside typified by pasture for dairy cattle and apple orchards. A wide range of dairy products are produced and exported. Norman cheeses include Camembert, Livarot, Pont l'Evêque, Brillat-Savarin, Neufchâtel, Petit Suisse and Boursin. Its butter and cream are lavishly used in gastronomic specialties. Fish and seafood are of superior quality in Normandy – turbot and oysters from the Cotentin peninsula are major delicacies throughout France.
This is a major cider-producing area. Perry (a pear brandy) is also produced, but in less significant quantities. Apple brandy, of which the most famous variety is calvados, is also popular. The mealtime “trou normand”, or Norman break, is a pause between meal courses in which diners partake of a glassful of calvados, and is still observed in many homes and restaurants. Apples are also used in cooking: for example, “moules à la normande” are mussels cooked with apples and cream, “bourdelots” are apples baked in pastry, partridges are flamed with reinette apples, and localities all over the province have their own variation of apple tart.
Other regional specialities include “tripes à la mode de Caen”, “andouilles” and “andouillettes”, salt meadow (pré salé) lamb, seafood (mussels, scallops, lobsters, mackerel…), and “teurgoule” (spiced rice pudding). Normandy dishes include duckling “à la rouennaise”, sautéed chicken “yvetois”, and goose “en daube”. Rabbit is cooked with morels, or à la havraise (stuffed with truffled pigs' trotters). Other dishes are casseroled veal, larded calf's liver braised with carrots, and veal (or turkey) in cream and mushrooms. Normandy is also noted for its pastries – it is the birthplace of brioches (especially those from Évreux and Gisors) and also turns out “douillons” (pears baked in pastry), “craquelins”, “roulettes” in Rouen, “fouaces” in Caen, “fallues” in Lisieux. Confectionery of the region includes Rouen apple sugar, Isigny caramels, Bayeux mint chews, Falaise berlingots, Le Havre marzipans, Argentan “croquettes”, and Rouen macaroons. The region boasts a number of excellent restaurants and has a total of 28 Michelin stars. 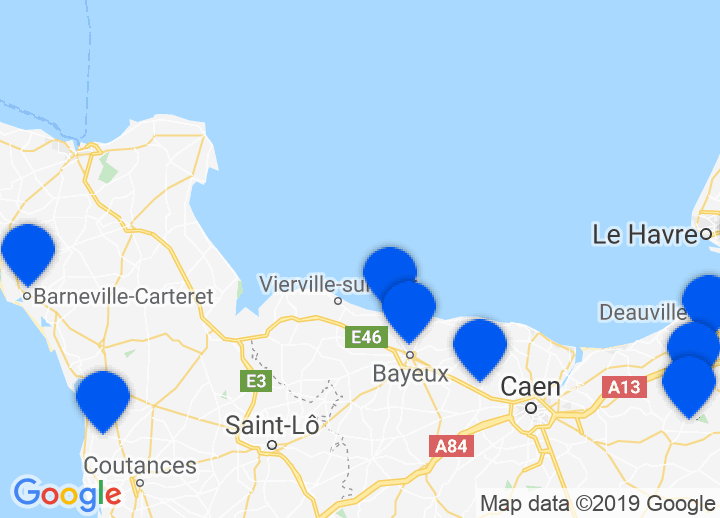 Just married or simply fallen in love? Take a look at our most romantic, stylish and idyllic hotels and guesthouses. Luxurious elegance or beautiful environment, the choice is wide …
Honeymoon & Romantic Hotels
Close your eyes and imagine: just you, the mountains, valleys or the sea. Escape daily routine and enjoy the magic of nature in one of our secluded getaways set in amazing surroundings.
Lodgings in Nature
Who says good things must be expensive? We have discovered a number of quaint little hotels and bed & breakfasts that are great value for money without missing out on comfort, service and beauty.
Stylish Budget Lodgings
Child friendly hotels and self-catering holiday homes great for children and parents alike. Let your kids enjoy nature and local traditions in the company of others with lots of unique things to do …
Child friendly lodgings
Take part of the laid back village life, stroll along cobblestone streets, dine in small traditional restaurants and smile at the locals on the main square.
Lodgings in Villages
There are so many beautiful wine regions that it is hard to make a choice. Besides the Chianti in Italy, Burgundy in France, the Douro in Portugal or La Rioja in Spain there are endless more …
Eno Tourism Hotels
Don’t want to leave your favourite pet at home? Just stay in one of our hotels and guesthouses where animals are welcome.
Pet friendly lodgings
Looking for a luxurious hotel next to a beach with golden sand, a villa above the dark blue of the Mediterranean or a small bed & breakfast in the hills overlooking the ocean …
Coastal Hotels and Villas
Handpicked selection of unique holiday homes and villas for a truly special escape, without losing that homely feeling.
Villas and Vacation Rentals
Tie the knot in one of our secret places and make your special day one to remember. A cosy castle, manor house, or overlooking the Mediterranean sea, we have a small sample of venues here.
Wedding Spots
Some accommodations go the extra mile, they are not only offering a place to stay, they offer a whole social experience - a space with soul, shaped by uniqueness, creativity and a special vibe, where people are able to connect with like-minded traveller.
Good for your soul

Hotels by province in Normandy

Hotels by city in Normandy