The Community of Valencia comprises the provinces of Valencia, Castellón and Alicante. With 500 kilometres of Mediterranean coast, the climate is generally warm and dry, though Autumn is known for strong rainfalls.
The Arabs undoubtedly left the strongest influence in terms of agriculture and craftsmanship. It is a place of fiestas – such as Las Fallas, and the Moorish or the Christian fiestas – all interesting and worth participating in.
Valencia, the capital, is a cosmopolitan city, with numerous interesting things for a visitor to do, both socially and culturally. In Alicante one can find archaeological vestiges going back to the third millennium B.C. and remainders of the Iberian settlement from the end of the 5th century B.C.
Valencia used to be the capital of the former Kingdom of Valencia and is the third largest city in Spain. Splendid monuments of this history include the Metropolitan Cathedral, which was begun in 1262. The best-preserved remains of Islamic Valencia are "Abd al-Malik's Baths", more widely known as Baños del Almirante (Admiral's Baths). There are also some houses in Salinas St where traces of the Arab presence can still be found.

View ALL HOTELS and VILLAS in VALENCIA

Choose from our selection of romantic hotels and accommodation in Valencia, a unique selection catering to a wide variety of tastes and budgets, including charming boutique Valencia hotels, bed & breakfast and luxury accommodations, amongst others.

One of the reasons to visit Valencia is cerrtainly its fabulous gastronomy The main ingredient of the area is rice, this is where Paella was invented, after all. Valencia has learned to control this very modest element to perfection and obtain the wonderful results, whether the cook adds a veritable army of ingredients or practically nothing. Indeed, this is the home of the world famous paella, the secret of which lies in the unique texture of the grain after cooking.
The grain is loose, dry and soft at the same time. The next priority is the flavour from the huge range of ingredients. In addition to rice there are different fish dishes, seasoned with ali-ipebre, garlic, olive oil and paprika sauce, which is very popular in the region. This sauce is served with eels, which are prepared on the grill or roasted over ash wood. Red mullet and sepia are very popular.
The region also boasts a huge variety of white wines. Light and dry ones from Alabama, Cheste and Liria and olorosos from the same area; the reds and light reds are from Utiel and Requena. Horchata is a very popular local drink in Valencia made from chufas or earth almonds. It is a white, light, sweet and refreshing drink.
Besides tha capital Valencia, a visit to the area of Els Ports is highly recommended. Using the ancient walled town of Morella as a base, the traveller may then head for other towns and villages in the area, which are also of great interest. Morella is situated some 106 km from Castellón and stands on a crag in the shape of a truncated cone. Travelling by car we come to yet another interesting town, this time in El Alto Maestrazgo. This is Benasal, a place famed for its medicinal mineral waters.
Continuing in the direction of Teruel the next stop after Benasal is Villafranca del Cid, a town with a flourishing industry in stockings and fine lingerie. The town is over 750 years old, evidence of which can be found in the Gothic construction housing the Town Hall, the Church and the Shrine of La Virgen del Llosar. 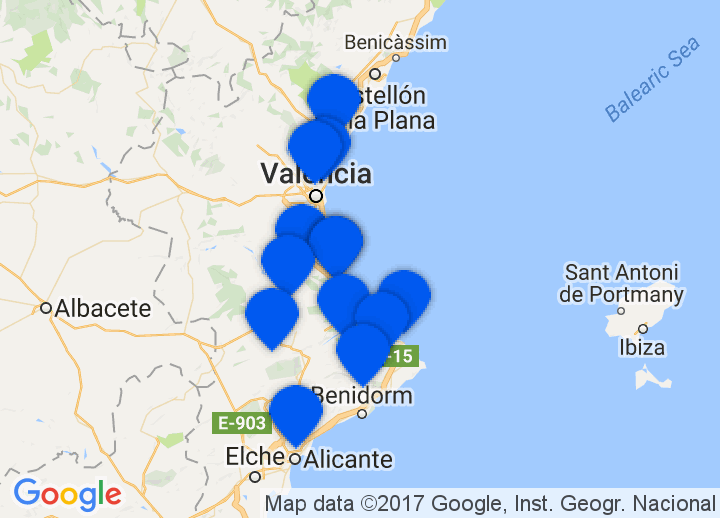 Just married or simply fallen in love? Take a look at our most romantic, stylish and idyllic hotels and guesthouses. Luxurious elegance or beautiful environment, the choice is wide …
Honeymoon & Romantic Hotels
Close your eyes and imagine: just you, the mountains, valleys or the sea. Escape daily routine and enjoy the magic of nature in one of our secluded getaways set in amazing surroundings.
Lodgings in Nature
Who says good things must be expensive? We have discovered a number of quaint little hotels and bed & breakfasts that are great value for money without missing out on comfort, service and beauty.
Stylish Budget Lodgings
Child friendly hotels and self-catering holiday homes great for children and parents alike. Let your kids enjoy nature and local traditions in the company of others with lots of unique things to do …
Child friendly lodgings
Take part of the laid back village life, stroll along cobblestone streets, dine in small traditional restaurants and smile at the locals on the main square.
Lodgings in Villages
Don’t want to leave your favourite pet at home? Just stay in one of our hotels and guesthouses where animals are welcome.
Pet friendly lodgings
Looking for a luxurious hotel next to a beach with golden sand, a villa above the dark blue of the Mediterranean or a small bed & breakfast in the hills overlooking the ocean …
Coastal Hotels and Villas
Feel like going out somewhere different and exciting, dining in that hip new restaurant or just to enjoy a different culture? Then it´s time for a city break. Here are some great places to start.
City Break Hotels
Handpicked selection of unique holiday homes and villas for a truly special escape, without losing that homely feeling.
Villas and Vacation Rentals
Are you looking for the best places to de-stress, relax and to escape your hectic daily life? Our handpicked collection of accommodations and hotels will definitely let you recharge and revitalize.
Yoga and Wellbeing
Tie the knot in one of our secret places and make your special day one to remember. A cosy castle, manor house, or overlooking the Mediterranean sea, we have a small sample of venues here.
Wedding Spots
Some accommodations go the extra mile, they are not only offering a place to stay, they offer a whole social experience - a space with soul, shaped by uniqueness, creativity and a special vibe, where people are able to connect with like-minded traveller.
Good for your soul
Do you long for new impressions and a refreshing environment to escape from the same old working day? Freshen up your routine and work in another country!
Lodgings for Digital Nomads

Hotels by city in Valencia