How on earth is it possible for a country to have so many islands. The Cyclades, for example is a group of roughly 220 of them, and some of the most famous islands to boot, such as Santorini, Mykonos, Andros, Naxos… the list goes on - only 216 to go.
When you look at one of those picture perfect postcard of the Greek Islands, the ones with clear blue sea, whitewashed houses perched precariously on the cliffs, it’s a fair bet that it comes from one of the Cyclades islands.
Of course, such a combination of beauty, nature, history and sea does bring with it the problem of overcrowding, especially in high season so we strongly suggest a visit in the early season (May to June) and post season (September to October). Plus off-peak rates are much better and the sun loses its power to burn as much.

View ALL HOTELS and VILLAS in CYCLADES

We have searched for those special places to stay in the Cyclades islands. Are you looking for a nice apartment on Syros? Do you feel like relaxing in a boutique hotel on Naxos? Here is a selection of our favourite boutique hotels and guest houses!

Cyclades islands - What do see

On Sifnos you can enjoy amazing sunsets, traditional festivals and numerous markets. Furthermore, pottery is very important here. You can watch the experts and have a look at the wonderful creations.
Milos is the island of colors due to the volcanic origin, the nice beaches and the colorful houses.
In the capital of Syros, Ermoupolis, are located a lot of neoclassical buildings, the Apollo theatre, churches and the amphitheatre. Also, it's worth it to see the village Ano Syros with his cathedral and the Capuchin monastery.
The biggest of the Cyclades islands is Naxos, which has a unique mix of beach culture and old ruins.

The Greek olive oil is absolutely essential in the cuisine of the Cyclades Islands and gives a special touch to the dishes.
In addition, fresh fish and seafood convince with an intensive taste.
For meat lovers, there is cooked or grilled lamb and goat with vegetables of the season. Of course, you will also have the opportunity to try delicate buffalo, tasty chicken and pork.
Do you feel like having a light salad? The typical Greek salad always contains feta cheese made of goat or sheep milk.
Two wonderful delicatecies are the honey from Mainalos and the unique saffron of Kozani. 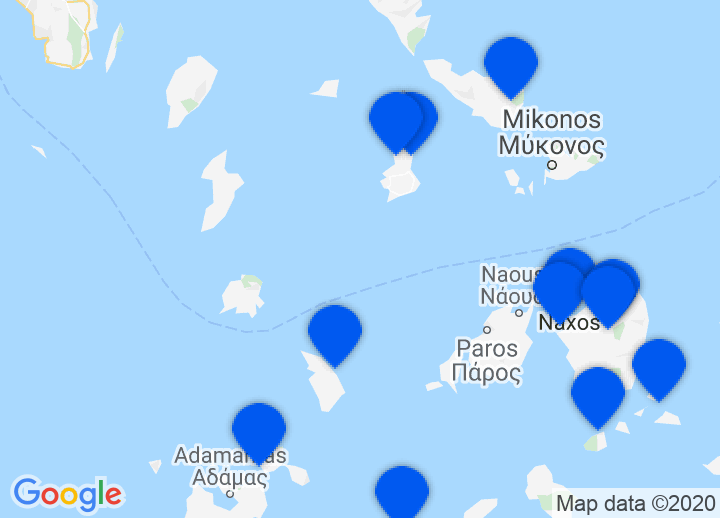 Just married or simply fallen in love? Take a look at our most romantic, stylish and idyllic hotels and guesthouses. Luxurious elegance or beautiful environment, the choice is wide …
Honeymoon & Romantic Hotels
Close your eyes and imagine: just you, the mountains, valleys or the sea. Escape daily routine and enjoy the magic of nature in one of our secluded getaways set in amazing surroundings.
Lodgings in Nature
Child friendly hotels and self-catering holiday homes great for children and parents alike. Let your kids enjoy nature and local traditions in the company of others with lots of unique things to do …
Child friendly lodgings
Take part of the laid back village life, stroll along cobblestone streets, dine in small traditional restaurants and smile at the locals on the main square.
Lodgings in Villages
Don’t want to leave your favourite pet at home? Just stay in one of our hotels and guesthouses where animals are welcome.
Pet friendly lodgings
Looking for a luxurious hotel next to a beach with golden sand, a villa above the dark blue of the Mediterranean or a small bed & breakfast in the hills overlooking the ocean …
Coastal Hotels and Villas
Looking for perfect breaks on secluded beaches? We have selected great places to stay near some of the best surf spots in Europe.
Surf and Watersports
Handpicked selection of unique holiday homes and villas for a truly special escape, without losing that homely feeling.
Villas and Vacation Rentals
From recycling and conserving energy to caring for the local wildlife and using sustainable construction materials, these beautiful lodgings worldwide are doing their part to protect the environment
Green hotels and lodgings
Are you looking for the best places to de-stress, relax and to escape your hectic daily life? Our handpicked collection of accommodations and hotels will definitely let you recharge and revitalize.
Yoga and Wellbeing
Some accommodations go the extra mile, they are not only offering a place to stay, they offer a whole social experience - a space with soul, shaped by uniqueness, creativity and a special vibe, where people are able to connect with like-minded traveller.
Good for your soul

Hotels by province in Cyclades

Hotels by city in Cyclades