Azores - natural beauty in the Atlantic

The Azores brim with natural beauty and lush vegetation. The sapphire blue sea and emerald green lakes, fertile prairies, volcanic cones and craters all combine to inspire even the most experienced of travellers.
Stress and pollution seem to be non-existent here, so no wonder the Azores has been nicknamed "God's home". It's that sort of Heavenly place.
They might be part and parcel of Portugal, but the fact is they are also further away from the mainland, some 1500km, than most European countries. It is quicker to get to Paris from Lisbon, for example, than to Pico Island.  Unsurprisingly, then, the Azores has developed its own distinctive identity and culture.

View ALL HOTELS and VILLAS in AZORES

Travel to the Azores and stay in small, romantic hotels and luxury hotels. Specially selected holiday accommodations from which to get to know the islands of São Miguel, São Jorge, Terceira, Pico, Flores and Graciosa. Whatever your reasons to travel to the Azores, be in a cosy apartment in Pico or enjoy a small boutique hotel ins Sao Miguel, Secretplaces will you help find the perfect spot.

Flores & Corvo: Flores & Corvo share a number of similarities. Separated by a mere 20 km, these two islands mark the most westerly point of the Azores and consequently perhaps because of this the least well known of the islands.
Graciosa, Terceira, São Jorge, Pico, Faial: They say Pico itself is part of the central group of islands that make up the lost Atlantis. Terceira makes up part of the central group of islands. Many galleons cast anchor here, weighed down with cargoes of spices from the East and gold and silver from America. The island, with its green patchwork of level fields dotted with the white silhouettes of dairy cows, the brush-strokes of vibrant colour between white-washed houses provides for a lovely sight, further enhanced by the epoch of azaleas in April and the hydrangeas during the summer.
São Miguel, Santa Maria, Formigas: São Miguel is the largest island of the Azores and famed for its impressive twin lakes, one blue, one green, Santa Maria, sandy beaches, grottos, impressive cliffs and fortresses. Indeed, S. Miguel boasts lakes and countryside of great beauty, along with the hustle and bustle of a large city, together with ample quiet green open spaces adorned with flowers. Museums, churches and palaces embellished with treasures of art and history.

Whatever the islands, the whole coast of the Azores provides a natural environment for the whale. Over twenty species of whales and dolphins, including Pilot, Sperm, Fin and False Killer whales are attracted to the area, which is so rich in nutrients. Boats can take you out to sea where you may view these amazing creatures face to face in their natural habitat.
Deep Sea Fishing: With sea depths of 300 to 800 metres only two to three km off the coast, the Azores is a big game fishing paradise. Swordfish, sharks, oceanic bream and tuna are in plenty supply and willing to put up a fight with keen fishermen. 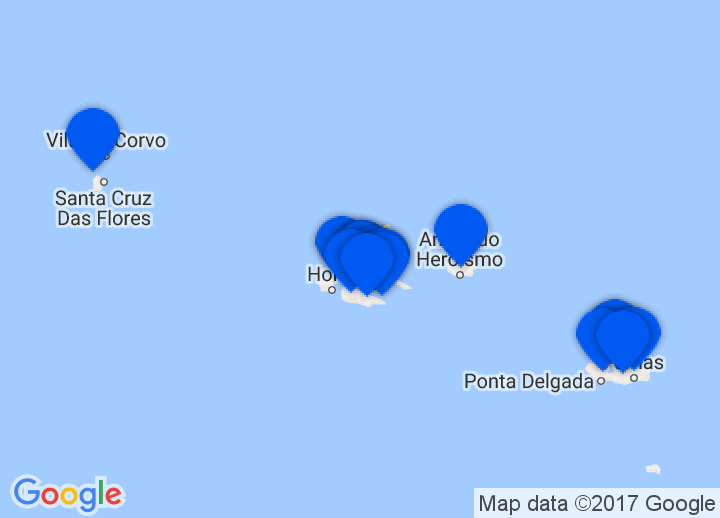 Just married or simply fallen in love? Take a look at our most romantic, stylish and idyllic hotels and guesthouses. Luxurious elegance or beautiful environment, the choice is wide …
Honeymoon & Romantic Hotels
A handpicked selection of elegant and luxurious accommodations. From five-star hotels to beautifully decorated guesthouses in unique surroundings ….
Luxury Villas and Hotels
Close your eyes and imagine: just you, the mountains, valleys or the sea. Escape daily routine and enjoy the magic of nature in one of our secluded getaways set in amazing surroundings.
Lodgings in Nature
Who says good things must be expensive? We have discovered a number of quaint little hotels and bed & breakfasts that are great value for money without missing out on comfort, service and beauty.
Stylish Budget Lodgings
Child friendly hotels and self-catering holiday homes great for children and parents alike. Let your kids enjoy nature and local traditions in the company of others with lots of unique things to do …
Child friendly lodgings
Take part of the laid back village life, stroll along cobblestone streets, dine in small traditional restaurants and smile at the locals on the main square.
Lodgings in Villages
Looking for a luxurious hotel next to a beach with golden sand, a villa above the dark blue of the Mediterranean or a small bed & breakfast in the hills overlooking the ocean …
Coastal Hotels and Villas
Looking for perfect breaks on secluded beaches? We have selected great places to stay near some of the best surf spots in Europe.
Surf and Watersports
Handpicked selection of unique holiday homes and villas for a truly special escape, without losing that homely feeling.
Villas and Vacation Rentals
From recycling and conserving energy to caring for the local wildlife and using sustainable construction materials, these beautiful lodgings worldwide are doing their part to protect the environment
Green hotels and lodgings
Are you looking for the best places to de-stress, relax and to escape your hectic daily life? Our handpicked collection of accommodations and hotels will definitely let you recharge and revitalize.
Yoga and Wellbeing
Some accommodations go the extra mile, they are not only offering a place to stay, they offer a whole social experience - a space with soul, shaped by uniqueness, creativity and a special vibe, where people are able to connect with like-minded traveller.
Good for your soul

Hotels by province in Azores

Hotels by city in Azores