There’s a reason why the Can Cera is located in the very heart of the old town inside the city walls close by to the Cathedral and between the Plaza de Santa Eulalia and the Plaza de San Francisco. It is very, very old. In fact, over over 700 years old, thus making it one of the most historic buildings in Palma.
It actually goes back to before 1232 when “Jaume I” conquered the island with Catalan and Aragones troops and over the centuries it has undergone a number of refurbishments, not least of which in the 17th century when Italian Renaissance architects inspired the creation of the celebrated patios, giving the houses their attractive, yet austere, character.
That’s the history lesson out of the way. Paradoxically, this most notable of buildings has only now been turned into a luxurious and classy hotels.
This is also actually a blessing. The Can Cera has managed to combine history with modern amenities to offer the discerning traveller old fashioned taste and modern service. What we mean is that it may have 12 rich, amply sized rooms (seven of which are suites) high ceilings of sculptured plasterwork, balconies and palatial embellishments of old, but it also boasts modern amenities that put most “modern type” hotels to shame.
WIFI, Jacuzzis, yoga, spa – all those modern little luxuries are all there, but so are those intangible little pleasures in the way staff look after you, the views of the old town from the terrace or the modern Gastro bar (in contrast with the historic nature of the place).
So it may old in years but young at heart. 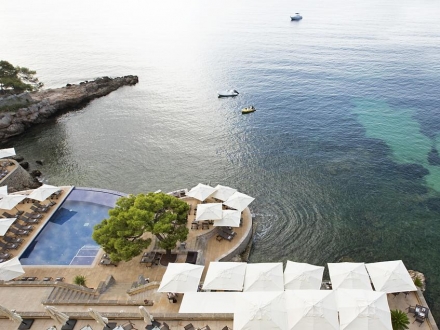